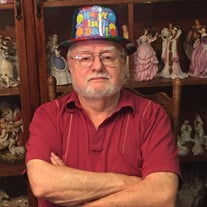 Dr. Ivey Chandler Dennard, 80, of Gordon, passed away on Thursday, August 19, 2021. The family will receive friends and family on Saturday, October 9, 2021 from 6 to 8 pm at Williams White Columns Funeral Home of Gordon. The family will have a private family service Sunday, October 10, 2021. The service will be streamed on our website www.whitecolumnsfh.net. To view go to Dr. Ivey Dennard's page and it will show there. Ivey was the son of the late Glynn and Zulene Dennard, of Gordon, Georgia. Growing up, he watched his father help to take care of neighbors’ sick animals, and at a young age he made it his goal to be a veterinarian. After graduating from the University of Georgia, he served in the United States Army briefly and then worked in private practice as a veterinarian for a short time before returning to his home town of Gordon, where he started the Gordon Animal Clinic, working there until shortly before he passed. Through his hard work and with the help of his wife, Jan, the clinic became successful and brought in clients from the local area, all of Georgia, and even other states. Over the 46 years he ran the clinic, it became a well-known destination for people who wanted friendly and straight-forward care for their animals and pets in a welcoming atmosphere. He always thought of it as a family business and considered both workers and clients as part of that family. Dr. Dennard was known for being open and honest, and despite his success, he was always proud to call himself a simple country vet. He was preceded in death by Jan Edwards Dennard, his wife of 57 years. Survivors include his children: Kevin Dennard, Keleste Palmer (Rance), Kelly Dennard; all of Gordon, Kerry Dennard (Amy) of Hawaii, Keith Dennard (Amy) of Virginia; grandchildren: Clarke Payne (Victoria), Cale Palmer (Hunter), Ben Dennard (Noelle), Cody Palmer, Emily Dennard, Katie Dennard, Casey Palmer, Andrew Dennard, and Lauren Dennard; great grandchildren: Carsen, Cade, Daniel, and Weston. He also left behind two sisters, Judy Brooks (Larry) of Gordon and Kathy Spears (Danny) of Jasper, as well as a number of nieces and nephews and great nieces and nephews. Although he is undoubtedly happy to be reunited with “his girl,” his presence will be sorely missed by so many whose lives he touched during his time with us. You may express condolences online at www.whitecolumnsfh.net. Williams-White Columns Funeral Home of Gordon is in charge of arrangements.

Dr. Ivey Chandler Dennard, 80, of Gordon, passed away on Thursday, August 19, 2021. The family will receive friends and family on Saturday, October 9, 2021 from 6 to 8 pm at Williams White Columns Funeral Home of Gordon. The family will have... View Obituary & Service Information

The family of Dr. Ivey Dennard created this Life Tributes page to make it easy to share your memories.

Dr. Ivey Chandler Dennard, 80, of Gordon, passed away on Thursday,...