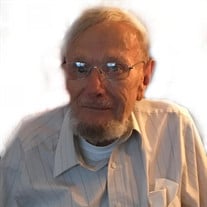 Mr. Charles Edgar “Ed” Yaun, age 94, passed away on July 12, 2016. Funeral Services will be held on Saturday, July 16, 2016 at 11 AM in the Williams White Columns Funeral Home Chapel in Gordon. Interment will follow in Ramah Cemetery. The family will receive friends at the funeral home from 10 AM until the service hour. Mr. Yaun was a native of South Carolina and had lived in Gordon since 1960 spending his most recent years in Macon. He had retired from Englehard and was a member of the VFW. He was a Veteran of the United States Army. He was the son of the late John Samuel and Eula Ford Yaun. He was preceded in death by his wife, Katherine Hall Yaun; brothers, W.A. Yaun, Joe Yaun, Herbert Yaun; and sisters, Mary Yaun, Ruth Sawyer, and Ruby Williams. Survivors include his children, Charlene Mahr of Edgewater, FL, Buddy (Jean Brantley) Hutto of Warner Robins, Curtis Yaun of Morgan Co., Ron ( Cindi) Yaun of Macon, and Donnie (Denise) Yaun of Marietta; Grandchildren, Robert, Tracy, Jimmy, Kelli, Clint, Sidney, Grayson, Trey, Maddie, Anna, Heath, Miranda, Ciara; and 12 Great Grandchildren. In lieu of flowers, memorial contributions may be made to the Wounded Warriors Project.

The family of Ed Yaun created this Life Tributes page to make it easy to share your memories.