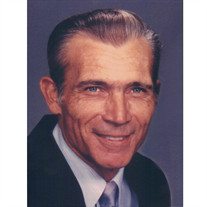 Charles William Russell, 79, of Ivey, GA, passed away Sunday, April 12, 2015 with his loving family surrounding him. He is survived by his wife of 58 years, Barbara Saunders Russell, his children Paula (Robert) McGinty, Gloria (Robbie) Hendrix, Kathy Russell, Michael Russell (Crystal & Johnathan Hubbard), along with his grandchildren: Kevin (Anna, Emily, Jonathan) Hendrix, Erica McGinty, Rachel (Brendan) Walker, Matthew Russell, Brandon Hendrix, Tyler Russell, Nick Russell, and Grayson Russell. Born and raised in Dublin, GA, he is the son of the late Robert and Gladys Russell, also of Dublin. His siblings include two sisters, Barbara Russell Etheridge (Carlton) and Joyce Russell Autry (John) and two brothers, the late Thomas Russell and the late Eugene Russell. Mr. Russell served in the United States Army from 1954 to 1962. He completed basic training at Fort Jackson, SC, and was stationed in Maryland where he met his wife. His family is grateful for his service to protect our freedoms. His skills and talents led him to work in the construction industry for most of his life. He later formed Goodwork Construction Company where he was owner-operator until a year before his death. He learned the value of hard work growing up and taught his children that same work ethic. His grandchildren even learned many things from him. He was able to share his love of fishing with them and they inherited his strength of character and love of family. Visitation will be held Wednesday, April 15, 2015 at Williams-White Columns of Gordon, GA from 5:00 to 7:00 p.m. and a celebration of his life will be held on Thursday, April 16, 2015 at 2:00 p.m. also at Williams-White Columns, with burial at Ramah Baptist Cemetery.

The family of Charles Russell created this Life Tributes page to make it easy to share your memories.